In golf course maintenance, insect pests are a potential problem lurking in every region. Just consider the recent armyworm invasions.

Long before armyworms made their menacing 2021 northern migration, a team of skilled and experienced researchers from BASF pondered the possibilities of combining a pair of active ingredients from different insecticide classes. The result of their efforts has led to BASF introducing its first insecticide for golf courses.

The insecticide is called Alucion™ 35 WG insecticide and it features the active ingredients dinotefuran (Group 4A) and alpha-cypermethrin (Group 3A).

Dinotefuran is translaminar and systemic, providing contact activity as it moves through the plant tissue, while alpha-cypermethrin binds to the plant cuticle and provides contact and feeding activity. The combination offers broad-spectrum control and suppression of numerous surface-feeding insects and ants. 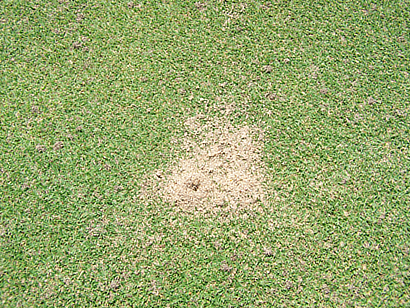 Nuisance ants are among the insect pests controlled by Alucion 35 WG insecticide.

The insecticide is called Alucion™ 35 WG insecticide and it features the active ingredients dinotefuran (Group 4A) and alpha-cypermethrin (Group 3A). Dinotefuran is translaminar and systemic, providing contact activity as it moves through the plant tissue, while alpha-cypermethrin binds to the plant cuticle and provides contact and feeding activity. The combination offers broad-spectrum control and suppression of numerous surface-feeding insects and ants. 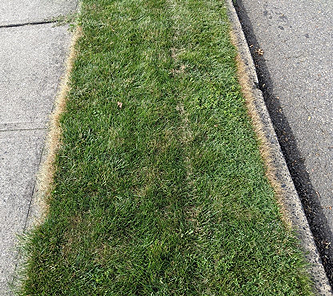 Adding an insecticide to its golf portfolio is further enthusing a BASF team also introducing Encartis™ fungicide and Finale® XL T&O herbicide to the golf market this year. Alucion 35 WG insecticide is the only synthetic pyrethroid with a non-restricted use label available to the golf market, according to BASF technical service specialist Jen Browning.

“It’s been a number of years in the making,” Browning says. “Alpha-cypermethrin, the pyrethroid molecule belongs to BASF, and we spent a good amount of time finding the right partner molecule and then testing to confirm that together they would deliver the speed and residual that we were targeting.”

Insecticide innovation isn’t a new concept for BASF. The company has a successful professional pest control division, and the active ingredients in Alucion 35 WG insecticide also help control insects within structures. One division’s staples can become another division’s innovations with thorough research and development.

“Both of these active ingredients have come over from the pest control side of our business,” says BASF senior technical specialist Kyle Miller. “They are well proven, and they are very good performers there. That’s one of the reasons they ended up together and we went forward, because we knew they would have a fit and they are just overall strong actives.”

“There’s always the possibility for synergy between two components when they are in a mixture,” says McGraw, one of the leading turfgrass entomologists. “That’s always interesting. Even if it’s an additive, you can have one component weaken a specific life stage and the other active ingredient can come in and do the cleanup.”

Alucion 35 WG insecticide is labeled for control of ants, armyworms, cutworms, sod webworms, billbugs and chinch bugs. Helping golf and turf professionals in cool-weather regions cope with armyworms represented a huge part of McGraw’s August and September days. “I’d rather talk about some other insects,” says McGraw, alluding to the devastation armyworms caused to turf this year. “We did some Alucion trials on fall armyworm and it looks really good on them.”

BASF defines commercial control of an insect as reducing individuals by 80 percent or more, according to Browning. BASF defines commercial suppression as reducing individuals by between 70 percent and 80 percent. Alucion 35 WG is also labeled for suppression of annual bluegrass weevil (ABW), European crane fly and mole crickets.

Trials have demonstrated Alucion 35 WG insecticide to be an intriguing tool in the cool-weather tussle to prevent ABW from damaging turf. “As far as ABW, I would recommend waiting to apply after the adult peak and before early instars are present (or post-egg hatch timing),” McGraw says. “That also allows you to come with a larvicide should you need to. In some of our really pyrethroid susceptible populations, this single application would give you what I could consider really good control. Having it early allows for additional product to be incorporated into that program should they be needed. This is an insect that we are not making a single application and walking away from in a generation.”

Ultimately, customers will determine how innovation can best solve potential problems. Insects vary from region-to-region and even from course-to-course. Alucion 35 WG insecticide can be applied wall-to-wall or via spot treatments once per year. Superintendents will surely find innovative ways to use a new product.

For excellent control of nimblewill, crabgrass and other tough weeds.

BASF and Golf Course Industry are working together to tell the story of how three new products are coming to life for the golf market. This is the third part of a three-part series.

There’s a new herbicide, too
BASF’s busy 2021 also involves releasing a new non-selective herbicide to the golf market that it has positioned as an alternative to glyphosate.

“It fills a nice void for us,” says BASF senior technical specialist Kyle Miller. “In the non-selective herbicide business, there are just a few choices, and we have one of them. We feel that’s important.”

Finale XL T&O herbicide possesses a myriad of potential uses on and around golf courses, including the ability to control weeds along cart path edges, at the base of trees, pond edges, pump houses, bunkers, fences, gravel walkways and parking areas, and landscape beds. It can also be used to make spot treatments in rough and native areas.

“The big thing is, wherever you spray it, that’s where it controls that particular weed,” Miller says. “It has pinpoint accuracy and gives you nice clean edges. If you are treating on the golf course or you want to edge bunkers or a cart part or whatever it might be, it’s great with really low use rates. We’re about half of what is used for glyphosate in a lot of situations.”

BASF technical service specialist Jen Browning adds, “It also doesn’t come with the baggage of weed resistance that glyphosate has. This year, there are 47 weeds worldwide that are resistant to glyphosate. Seventeen are in the United States and three of them are Poa species. There are no Poa species that are resistant to glufosinate, the active ingredient in
Finale XL T&O herbicide. There’s only one weed in the country that has shown any glufosinate resistance and it doesn’t show up in turf and ornamentals.”

Finale XL T&O herbicide also brings a different hue to the spray tank. The new formulation from BASF features a red color, allowing applicators to clearly see the volume in the tank.